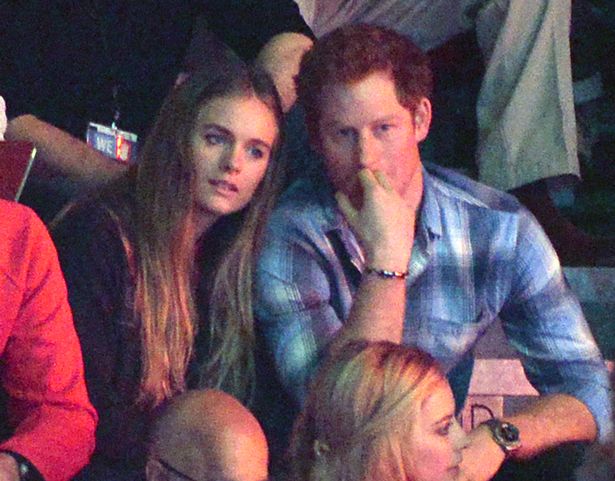 Actress Cressida Bonas has told how she was moved to tears as she played Sheila “Bambi” Caffell, the model initially blamed for killing her own young sons and parents in the White House Farm massacre.

In her first major TV role, Prince Harry ’s former girlfriend Cressida says she “felt a huge responsibility” playing Sheila, whose brother Jeremy Bamber actually carried out the killings, making it look like a murder suicide by his sister.

Cressida describes one harrowing moment during filming when she was watching from a window as her character’s estranged husband Colin Caffell said goodbye to his six-year-old twins Daniel and Nicholas. It would be the last time he saw them alive. She says: “I remember everyone on set was really quiet during that filming. I was watching from a window as I wasn’t in the scene. That moment really hit me, knowing what was to come.

“That really stayed with me – I got really emotional. Those are the moments when this story hits home. This is not fiction. It really happened.”

ITV’s White House Farm drama tells how Jeremy Bamber killed his adoptive parents Nevill and June Bamber, both 61, sister Sheila, 28, and her sons at the farm near Tolleshunt D’Arcy, Essex, in 1985.

The investigating officer, DCI Thomas “Taff” Jones, regarded it as a clear case of murder suicide by Sheila, a former model known as Bambi, who suffered from mental health issues and had been diagnosed as schizophrenic.

But he was wrong and, 14 months later, Jeremy Bamber, then 24, was convicted of the murders. Now 58, he is serving a whole life tariff and still protesting his innocence. The TV drama will show how Bamber’s cousin Ann Eaton, played by Gemma Whelan, refused to accept Sheila was to blame and dared to stand up to DCI Jones (Stephen Graham).

A few dissenting police officers, most notably DS Stan Jones (Mark Addy), also dared to defy their superiors to get to the truth.

Then, a month after the murders, Bamber’s girlfriend Julie Mugford finally went to the police and told them her boyfriend had shot dead his family to get his hands on his inheritance.

Writer Kris Mrksa says his aim with the dramatisation was to “do justice to the emotional truth” of what happened.

“That a decent family, including two small boys, were murdered in cold blood apparently so a greedy young man could secure his inheritance.

“And he might have gotten away with it, if it weren’t for the courage and perseverance of a few brave people.”

Bamber still maintains his sister was to blame and has appealed unsuccessfully several times. In October, the Mirror revealed he plans another appeal.

Director Paul Whittington said one of his priorities was to pay tribute to Sheila’s memory. He says: “It is a remarkable performance from Cressida Bonas.

“She had to do many things in terms of presenting the sensitivities of that character. Vivacious and insecure at the same time, with mental health issues, and a loving mother.

"The biggest compliment that could be paid to Cressida is that Colin Caffell said she absolutely captured the essence of Sheila.”

Cressida says: “I felt a huge responsibility. I wanted to make it as honest as I could. Looking at how mental health was treated then, it’s so different to now. The way she was labelled I thought was so shocking. She was a very vulnerable person.” Colin says he knew Sheila would never have been capable of the murders. He recalls: “Once people explained the circumstances to me, I said, ‘Sheila couldn’t have done that’.

“She had never picked up a rifle in her life and certainly never knew how to fire one or load one. As a mother to the twins, she was always kind and loving, playful, like a lioness with her cubs, never ever angry with them.

“People forget the details of this case, but so many have stuck in their mind the impression that Sheila was a drug addict. She was not a drug addict.

"Sheila was very subdued by her prescribed medication. I know this has to work as a drama. They have done it very well. It exonerates Sheila.”

He also feels that Freddie Fox does a great job playing the killer.

Colin, who wrote In Search of the Rainbow’s End about the murders, says: “Freddie’s portrayal of Jeremy Bamber is scary. He read Jeremy’s letters that are in my book and he said, ‘I’ve got him’. He is brilliant.”

Colin remarried and became a father again, moving to Cornwall to start a new life as a sculptor and potter.

He is prepared for the story to resurface when the drama is screened next month. He says: “I’m fully supported by my family so I’m not worried.” Freddie, 30, was asked by people campaigning for Bamber’s release to meet them before playing the role, but turned down the invitation.

He says: “I entertained it. I was approached by his campaign to go and have a conversation with them from Jeremy’s point of view. It was decided it wasn’t helpful in the creation of the character.”

Mark Addy, 55, plays DS Stan Jones, who died in 2014, and says seeing Freddie in costume took him right back to the news reports of 1985.

He says: “He managed to portray that arrogance and calmness under stress. All the things that Bamber displayed.” Alexa Davies, 24, who plays Julie Mugford, admits she took months to work out why her character did not immediately tell the police what she knew.

She says: “She was just 20, totally in love with Jeremy and planning her future with him.”

Gemma Whelan, 38, admits the scenes where Ann challenges Taff were tough. She
says: “It took us about 20 takes for me to not rise to Stephen Graham.

At that time Taff would be very much in control over this silly little woman who came in with her Miss Marple ideas. I had to really sit back. It really shows Taff up as Ann doesn’t react.” Writer Chris believes those who finally got to the truth deserve recognition. He says: “Stan Jones was never formally decorated or commended for his work on this case. I hope that’s one thing we can put right here. His behaviour was courageous.”

But he says: “The police could not condone him going above his commanding officer’s head so he got a cup of tea and a pat on the back.

“In my version of Stan he was happy with that because justice was served.”

Posted by mediaadmin at 4:10 PM