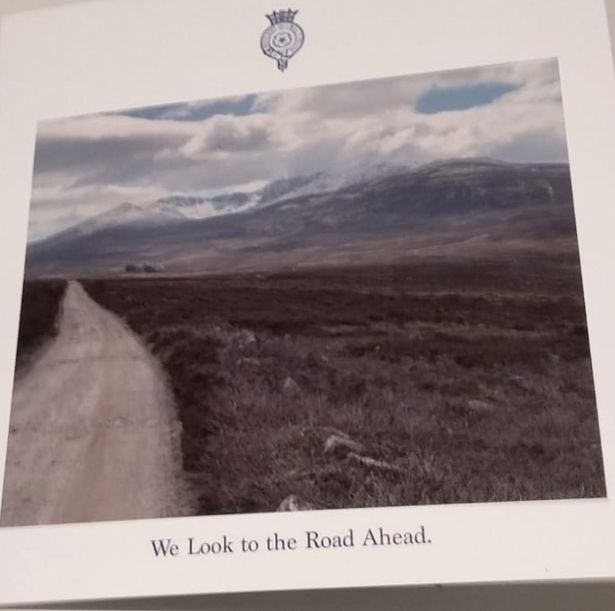 It's been a tough year for the Duke of York – and it seems he's made a subtle nod to it in his Christmas card.

Prince Andrew and his ex-wife Sarah, Duchess of York, shared their festive card, which features one image of one of their Norfolk terriers nose-deep in a bush with it's rear end to the camera.

Another not-so-thinly veiled reference to the family's turbulent year is in a second photo which shows what is believed to be the Queen's Balmoral estate and a path through the Highlands.

A message alongside it reads: 'We Look to the Road Ahead.'

Written inside the embossed card is a message from the pair and their two daughters Beatrice, 31, and Eugenie, 29, which says: 'We are united with gratitude for your support and kindness, Thank you.'

Their message follows Andrew's controversial TV interview last month in which he attempted to clear his name over the Jeffrey Epstein sex scandal.

The 59-year-old has denied any wrongdoing – particularly claims by  Epstein's victims, Virginia Roberts, that he slept with her three times, including once when she was just 17.

As a result of the scandal and the interview, Andrew was forced to step back from royal duties by the Queen.

The Duchess of York, 60, has remained supportive of her ex-husband despite them divorcing in 1996.

Ahead of his BBC interview, she said: 'I am with him every step of the way and that is my honour. We have always walked tall and strong, he for me and me for him.'

Some of the Christmas cards have sent with gifts including a pencil with a crown on top of the words 'Duchess Doodles' and a notebook with the phrase 'A penny for your thoughts' on the front.

Posted by mediaadmin at 4:37 PM